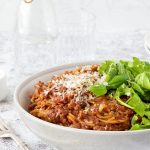 Spaghetti bolognese is such a classic recipe – it seems almost too basic to feature in one of the weekly menus! This version is my everyday recipe with a few extra veggies thrown in.

I think the key to a good spaghetti bolognese is to not skimp on the bolognese sauce (and a generous helping of parmesan doesn’t go amiss either).

Do you already have a well-loved spaghetti bolognese recipe – is it very different to mine? Leave a comment below and let me know! 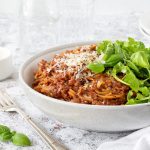 Spaghetti bolognese is such a classic recipe - it seems almost too basic to feature in one of the weekly menus! This version is my everyday recipe with a few extra veggies thrown in.

WINE MATCH: A Sangiovese is nice.
GLUTEN-FREE OPTION: Use gluten-free stock cubes. Make sure Worcestershire sauce is gluten-free (or replace with 1 tsp gluten-free Vegemite). Swap regular spaghetti for gluten-free spaghetti.
INGREDIENT SWAPS / NOTES: Use half beef mince and half pork mince for a more authentic spaghetti bolognese. I used Italian herbs flavoured passata. You can omit the frozen veggies - they are definitely not a traditional addition, I just wanted to add some extra nutrients! For a healthier spaghetti option, try “pulse spaghetti” (I tried this and found it was ok when the spaghetti was eaten fresh, but went too mushy on reheating). Wholemeal spaghetti is a good alternative too.
STORING AND REHEATING: Store individual portions in containers in the fridge and reheat in the microwave. Store rocket separately and add just before serving.