These stacks are filling enough without the meat, but you could add some grilled steak if you like.

If you’re wondering what to do with the leftover cauliflower florets, you can roast these too and serve with the meal. Alternatively, use a food processor or grater to rice the cauliflower. Place in an airtight container and freeze to use as a replacement for rice. Cook in the microwave from frozen, then stir through a little butter and season with salt and pepper. 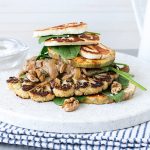 WINE MATCH: A dry Riesling would work nicely with this meal.
GLUTEN-FREE OPTION: Ensure stock powder is gluten-free.
INGREDIENT SWAPS: You could use orange kumara or potato instead of red kumara. Red onion is a nice alternative to brown onion.
ADD ONS: Make this meal meaty by adding steak to the stacks. Rump, sirloin or eye fillet steak would all work well. Cook to your liking.
STORING AND REHEATING: Leftovers can be assembled, refrigerated and then reheated in the microwave. Alternatively, reheat cauliflower, kumara and haloumi in the oven and microwave caramelised onions before assembling.