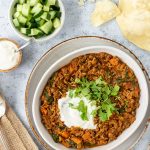 Curried mince – packed with Indian spices but eaten a bit like nachos!

I’ve swapped some of the mince for lentils and there are plenty of veggies to provide a nutrient boost – something we might all need at the moment!

If you’re keen for a little indulgence, add some garlic naan on the side. It’s perfect for wiping the bowl clean 😋 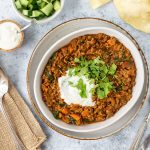 Curried mince - it’s packed with Indian spices but is eaten a bit like nachos! I’ve swapped some of the mince for lentils and there are plenty of veggies to provide a nutrient boost.

WINE MATCH: A Gewürztraminer.
GLUTEN-FREE OPTION: Make sure curry paste is gluten-free. Choose gluten-free cornflour and make sure pappadums are gluten-free.
INGREDIENT SWAPS / NOTES: If you prefer to use a different curry paste, butter chicken or tikka masala should both work.
BULK IT UP: For an extra treat, add some garlic naan bread too!
STORING AND REHEATING: Store individual portions of mince in containers in the fridge. Reheat in the microwave and add cucumber, yoghurt and coriander just before serving. Pappadums can be stored in an airtight container at room temperature.